Most people know Kenneth Yu as the founder and publisher of Philippine Genre Stories, and as a prolific speculative fiction writer. What most people don’t know is that he’s also a family man who loves to eat. His guest post on this blog takes the form of a letter.

How have you been? It’s been a while since you, Charles, and I, have gotten together, and I’m looking forward to seeing the two of you for dinner next week after I return to the country. I’m currently in Osaka for a family holiday (much needed!), and I’m just writing ahead to tell you about a restaurant we patronised here called Matsusakagyu Yakiniku M. My wife and two kids enjoyed it very much, and knowing how much you like steak, I’m quite sure that if you ever make your way here, you’re going to enjoy it also!

But before we could eat there, let me tell you that we first had to find it!

We had left our hotel early that morning with plans to have lunch at Matsusakagyu Yakiniku M (hereinafter referred to as MYM, so that I don’t have to write out the whole name all the time) after a morning of shopping at Shinsaibashi. Our plan was to take the train along the Midosuji line and get off at Shinsaibashi station, then walk the roughty 600-800 meters from there to Namba, near Dotonburi, where MYM was located. We had maps and guidebooks and the notes of friends who had been there, so we were confident we would be able to make our way there despite our being tourists. That 600-800 meters was an entire shopping stretch, so we figured we could shop as we strolled so that by the time we got to Dotonburi, it would be a simple matter to go to MYM for lunch. But as you know, the best laid plans, blah blah…

We walked the length and back of that walkway. We reached a very wide avenue on one end of it, and another one perpendicular to it (I forget their names, sorry), desperately trying to understand the map that we downloaded and printed from the web. The kids were complaining already about all the walking, and were famished, but the wife and I were determined to find MYM because it came highly recommended by friends. I mean, dammit, we were here already, who knows when we’d have another opportunity to return, so we weren’t going to give up just because we were strangers in a strange land, couldn’t speak the language, and were getting tired.

Despite all that, it was not boring walking up and down restaurant row in Dotonburi. The Japanese decorate the facades of their restaurants not only with the restaurant names (in their language, of course), but with the most interesting images. For example, here’s a crab:

And believe it or not, it moves, too, like an animatronic. The restaurant’s specialty is, well, duh, crab, and my wife said it’s quite expensive.

Here’s another one, an octopus:

He’s holding some chocolate pastry on a stick. I assume the restaurant specialises in octopi, or chocolate pastries on sticks, but I couldn’t be sure.

And here’s another one:

Clearly, this was for sushi and sashimi, though having a giant disembodied hand holding it up over the heads of passersby can be pretty surreal. In fact, it feels like a scene from one of your stories, haha. I think this restaurant serves sushi and sashimi on a moving conveyor belt, and one piece would cost you only 100 yen. You can just pick your type of sushi or sashimi off the belt with your chopsticks fresh, since the chefs are making them in front of you from behind the counter and placing their creations on the belt for you to choose from.

I also saw a giant pufferfish, yeah, the poisonous kind, on display at another restaurant, but I wasn’t able to get a photo of that, sorry. Too many people.

But I got photos of these:

I recognise the red creature as an oni from some Japanese tales I read in the past, but I have no idea what the wooden animal or the golden baby is, nor why there’s an angry chef at the other restaurant. Neither do I have any idea what these restaurants served (or even if they are restaurants). 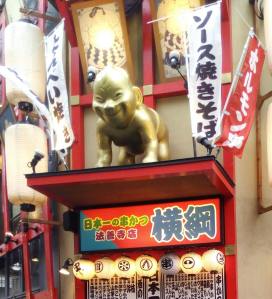 Anyway, back to MYM.

So, we walked and walked and asked directions from pedestrians and even police, but because of the language barrier, we couldn’t get anything clear…until, an old Japanese man who spoke good English and who had overheard us asking for help walked by and offered to take us to MYM. We were so embarrassed that he went out of the way to help us, expecting nothing in return and with no intention to take us for a ride, so we were very grateful. In fact, everyone we talked to was nice, but it was this old man who really went out of his way to help us. All this speaks positively for the people of Osaka and the way they treat tourists.

The old man taught us that to reach MYM, one had to take a less traversed road off the main walkway, and then, enter a very narrow alley (just enough for two people to walk along side-by-side comfortably) that, if one wasn’t paying attention, would be so easy to miss. Less than 100 meters into the alley, and at about 1:30 in the afternoon, Osaka time, we found the restaurant… 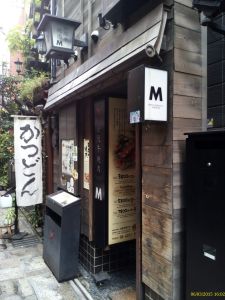 So you can imagine how my ravenous kids reacted. The wife and I weren’t too happy either. It was drizzling, so were cold and wet as well. The helpful old man had gone on his way, leaving us wondering what to do next.

We dared to knock on the narrow wooden door. No answer. We dared pull it open, and were surprised to find it unlocked. But the entryway was small and even narrower than the alley, so we shut the door right away. We just stood there under our umbrellas in the drizzle, wondering what to do. But we were lucky on this trip, because suddenly, an employee of the restaurant walked by in front of us, pulled the door open, and entered! It was just reflex on my part to knock on the door before he could disappear into the darkness.

He stuck his head out and I told him that we would like to have a table. Wonders, he spoke English! He said they were closed, but they would reopen at 5:00 pm, and would we like to make a reservation. I said yes, of course, and he went back inside, saying he would check if any seats were available. He came back out after a few minutes and said we could have a private room at 5:00 pm, but we could only stay up to 7:00 pm, as they had other reservations to follow. We agreed, he said goodbye, and politely closed the door on us, and suddenly we had an afternoon to kill. Our lunch plans were shot, and we were still hungry.

So, what did we do? We did what any tourists from our country would do: we improvised. We went back to the main walkway with all the restaurants, found a place that served ramen, rice, tonkatsu, curry, and had a late lunch (still tasty, still delicious, but another story altogether). Then, with more than a couple of hours to kill, the wife decided we’d go shopping again. By the time we returned to MYM, we were carrying a few more shopping bags than before.

So now we get to the meat of it, pun intended, hehe.

MYM is famous for its carefully raised and prepared beef, no outsourcing of any kind. They raise their own cattle and prepare the meat themselves. We first heard of MYM from friends, and word has spread among Pinoys that this is one of the must-visit restaurants in Osaka. It has a high Tripadvisor rating, but the word-of-mouth from friends is more than enough endorsement.

We were brought into a very small and cramped private room with benches and tables made of dark wood. There is a second floor with a public area, I think, but I never went up, being content to just stay in our private room. In the middle of our table is a grill where we could cook the beef ourselves, and each of us was given a small tray of condiments: pepper, soy, and barbecue sauce.

One really nice thing about this restaurant is that their wait-staff, in addition to being friendly and accommodating, spent some time actually explaining not just the menu, but even the restaurant itself, giving a diner a deeper sense of the establishment’s identity and concept. Then, when they did crack open the menu, they took the time to explain the various specifics of the offerings and what cuts of meat goes into each. It’s quite an education, and leaves you with the overall sense that, hey, they know their beef, and you’re not getting just any old ordinary meat here. To newbies and non-cooks like us, it was reassuring.

I apologize. I know the shot could be better, but it was kinda’ heard to take good shots in such a small place, and everyone wanted to eat already, so everyone was in a hurry to get things cooking.

Each of the cuts in the photo correspond to a certain part of the cow, and that was diagrammed in the menu, with a short description of each. It was a bit of challenge understanding the Japanese words and matching them to what was in the diagram, but hey, that was part of the fun. Before cooking on the hot grill, we used a pair of tongs to wipe a large piece of beef fat on the grill, which served to oil it, before proper cooking. Like I said, we weren’t exactly the best cooks in the world, so it was helpful that we were told by the wait-staff to cook each cut between 12-20 seconds for each side, depending on how rare or well-done we wanted it to be. Just to complete the meal, we also ordered some of the garlic rice that was recommended.

Even in our inexpert hands, the family maintained that this was some of the tastiest and most delicious beef they had ever tasted.

So, despite getting lost and having to wait till dinner time, we left the Namba area happy and sated. It was probably our best meal on this trip. Of course, our dessert was the best, because we already planned to buy some Pablo cheesecake before heading back to our hotel.

If you ever find yourself in Osaka, Yvette, try to make your way to MYM. Let me know beforehand, and I’ll do my best to give you directions there, so you won’t get as lost as we did. Knowing how you like beef as much as you do, I’m sure you’ll enjoy this place as much as we did.

See you and Charles when we get back!

Kenneth Yu resides in San Juan with his family, having moved from Quezon City just recently. He’s the founder, publisher, and editor of PGS, Philippine Genre Stories (philippinegenrestories.com), which is currently inactive, but hopefully, will come back to life very soon. It was through PGS that he met and developed his friendship with writer Yvette Tan, and with Charles Tan (no relation), the “Charles” mentioned in the writeup above.