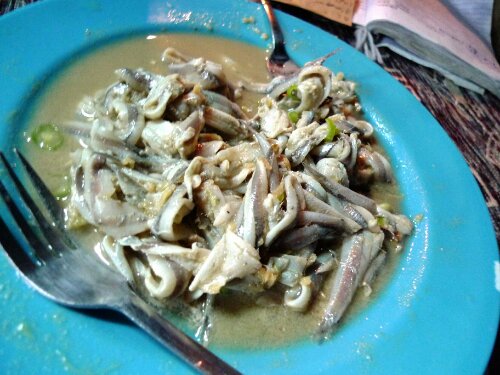 You know how your mother tells you never to accept food from strangers?

I broke that rule during my first time in Laoag, the capital of Ilocos Norte.

My companions and I were checking out Dap-Ayan ti Ilocos Norte, the hawker food court where you can get fresh Ilocos empanadas and other provincial treats, but mainly Ilocos empanadas, which are quite tasty. A mixture of meat, shredded green papaya, and other vegetables, and hopefully an egg are stuffed into an orange-colored flour-based casing and deep fried so that it’s crisp on the outside and piping hot on the inside. It is street food at its best, and the Ilocanos are very proud of it, as they should be.

We stopped at the first empanada stall in Dap-Ayan and my companions struck up a conversation with the vendors. I noticed that one of the proprietors was having dinner. She was spooning tiny fish swimming in a cloudy liquid onto a plate of rice and eating everything with gusto.

My friend asked what the lady was eating and the lady said it was kilawin na dilis (ceviche), and would she like some? My friend declined, but jokingly asked me if I wanted to try the dish.

Not being one to back down froma challenge (and from the offer of food), I said yes. The lady handed me her spoon. I scooped a few small fish with some of the vinegared sauce and put it in my mouth.

The dilis was salty and a bit bitter, not my thing at all. I’m happy the lady was nice enough to offer me a bite of her dinner. Now I know that kilawin na dilis isn’t for me, and that the way I found this out is a story in itself.

3 thoughts on “On Accepting Food from Strangers”